Every recession is preceded by an inverted curve, but not everyone ends in a recession

Joel Simmons December 14, 2021 Recession Comments Off on Every recession is preceded by an inverted curve, but not everyone ends in a recession 48 Views

Outlook: We get the November PPI today, probably again at 9% and the core at 7.2% versus 6.8% last time around (consensus and estimate from Trading Economics). Tomorrow is retail sales before the Fed’s statement. 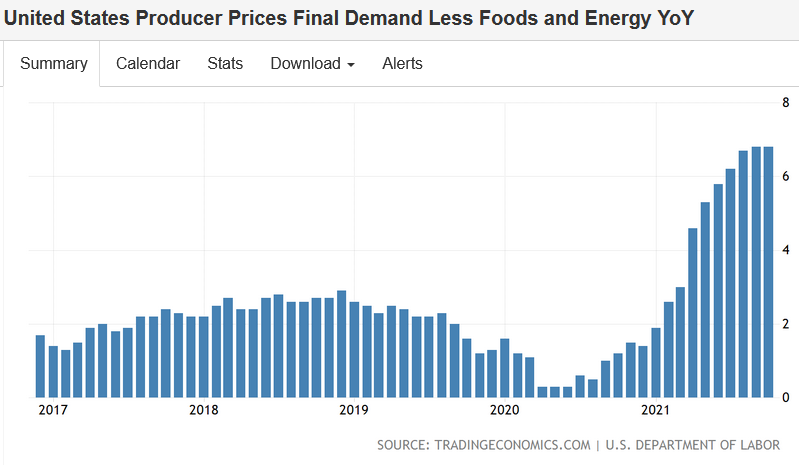 Everyone is building scenarios for the Fed and the economy next year, and therefore the Fed’s responses. Anticipation is high for the Fed’s forecast and the dot-plot. At stake is inflation, whether wage gains will fuel inflation eventually, and growth rates, especially if the United States goes into recession next year.

Some people fear that the dollar has snatched all the profit it will derive from the first rate hike, and that in several months! Inflation may need to rise even further to restore the recovery, and that’s unlikely – in fact, inflation is likely to peak this month and next. This will be visible in particular in month-to-month data, although year-over-year continues to be scary. We see inflation persisting for much of the year, if not all year, but moderating to a level of 3.5-4%. Freeing up supply chains may well lead to steep price drops, depending on how much excess inventory buyers have bought to be on the safe side. Wait for Christmas toy prices to collapse in June. The wild card is wage growth, although wage growth is hardly ever the main source of inflation in the United States, it would be commodity prices.

As for the recession, that is not the right word. Once output catches up with demand, a slight drop in output is only to be expected and not the same as a “recession” even though it permeates overall growth (especially employment). It will be used to appeal to the Fed’s doves, anyway. We confidently anticipate a fight between those who say the Fed’s tapering / hike should be limited, very limited, and those who want to make sure inflation drops to 3.5% and stays there, even only for the expectations component if not for the reputation and credibility of the Fed.

If this is the way things go and barring Covid’s surprise, global growth picks up and that means we are following the leader, the Australian dollar. (And by the way, Australia releases employment data on Thursday and can validate the growth thesis.).

But thinking of Australia makes us think of China, and there we are not yet sure that the Evergrande sector / real estate development debacle is going to end without a crisis or shock. West of the Eurasian continent, Russia tries to be a global player but is in reality only the 11th country in terms of GDP (see World Bank table). It was the 6th largest just a few years ago (2017). As often cited, many US states (California, Texas, New York) have a larger economy in terms of GDP than Russia. The funny map is from the American Enterprise Institute in 2015 and for some reason excludes Russia. It’s not clear that size determines bellicosity, anyway, although it likely does affect the duration of conflict. But becoming more punished day by day only increases Putin’s need for assertiveness and reclaiming territory seems to be his first choice. You must feel great pity for the Russian people. Either way, a serious showdown against Ukraine (or anywhere else in the neighborhood) is a surefire promoter of the safe-haven dollar. 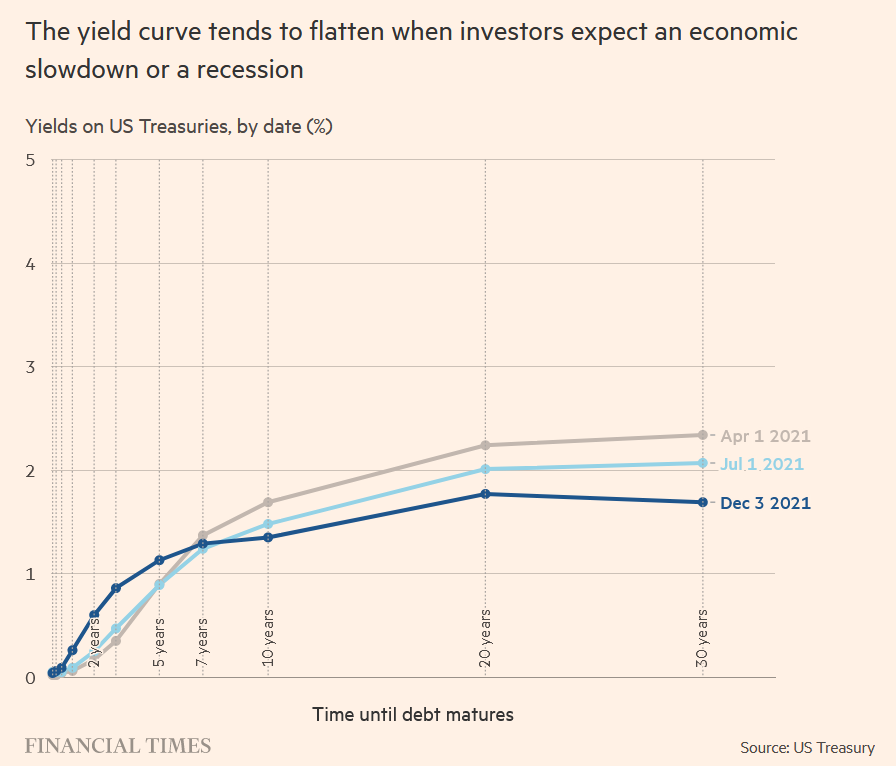 Ah, but the yield curve tells us not to expect a pickup in global growth. We don’t know where the bond gang came from, but the problem is still with us – it’s flattening out everywhere. See the FT chart. While every recession is preceded by an inverted curve, not all inverted curves end in a recession. As the FT explains, the curve represents the collective wisdom of the crowds and they see the recession. Another idea is the inverted curve which undermines confidence in the economy. Hmm, aka self-fulfilling prophecy. The FT concludes with this grim finding: â€œThe spread between US 10-year and 2-year yields narrowed in early December to its narrowest point in about a year, before investors began to expect a rebound. strong economy.

â€œFor some investors, this latest flattening is a sign that the Fed will only raise rates slightly, given the relatively modest growth prospects over the medium to long term. Others go further, saying it is a sign that aggressive rate hikes would be a “policy error” that would stifle economic growth and therefore force the central bank to have to cut rates again. “

We called this crowd the Gloomsters bordering on a fringe fringe, but we may have to step back from that. Here’s the real problem: No one ever really knows the medium to long term growth prospects. Period. They depend on a million things, including demographics, weather, technology, trends in education and climate change, and nowadays, of course, the pandemic.

The only solid evidence we have in the United States of a looming recession is this pesky quit rate. With millions of people leaving the workforce, the labor shortage will persist and the upward trend in wages and salaries will also persist. It would not take long for “wage inflation” to become a thing again. So the Fed could complete the tapering and move up, but intends to pull out once it delivers the “We are fighting inflation” message. If wages keep going up, they come back for more. Can you get wages rising while growth falters? Yes, on the catch-up period. The other thing you get with increasing wages is more automation and more leakage to overseas producers.

It all seems a bit muddled. Don’t forget the Atlanta Fed’s revised GDPNow tomorrow, at 8.7% for the fourth quarter of last week. The Atlanta Fed almost always overshoots, but the contrast between the projected growth rate and the flattening of the yield curve is baffling. The two things shouldn’t be happening at the same time. Either yields are expected to rise or GDP forecasts are expected to fall. Granted, the economic modeling is flawed, but it appears that the modeling provides a surprisingly narrow range of predictions. The Philly Fed, for example, has 5.5% this year and 3.9% in 2022. The Conference Board has 5.0% for the fourth quarter and 5.5% for the year 2021 with 3.5% in 2022. Goldman recently reduced its forecast from 4.2% to 3.8%. for 2022. Final result, 3.5 to 3.9% for 2022. This is hardly a stagnation.

Our best guess is that this year will be an anomaly regardless of the number due to the lockdown, while next year will be 3.5-4.5% more normal regardless of normal. Note that since the 2008-09 financial crisis, growth in the United States has hovered below 4% and has more often been concentrated around 2%, so a return to 3.5-4.5% is in the pipeline. made a net gain.

Given the perpetual deflationary malaise in Japan and the perpetual slow growth pattern in Europe, the US, UK and CAD / AUD remain the growth leaders. We do not see this end. If the currencies keep pace with the growth, so good, Jack.

Funny little info: The WSJ has a dandy story of the flood of excess liquidity from European banks flowing into the US repo market as the end of the year approaches. See the graph! Banks with excess liquidity have to pay to park it at the ECB (negative rates) while the Fed pays 0.05%. “The yield on the German benchmark two-year government bond stood at minus 0.692% on Monday.”

But note the series of damning claims: Covid programs meant to boost lending have just “grappled banks with more money than they can use.” One manager says, â€œThere is so much money and not enough investment to make. In fact, “last year the ECB lowered the interest rates on its loans to minus 1%, which means banks were paid to borrow.” So, borrow at a negative rate, convert to dollars, and get 0.05% from the Fed. 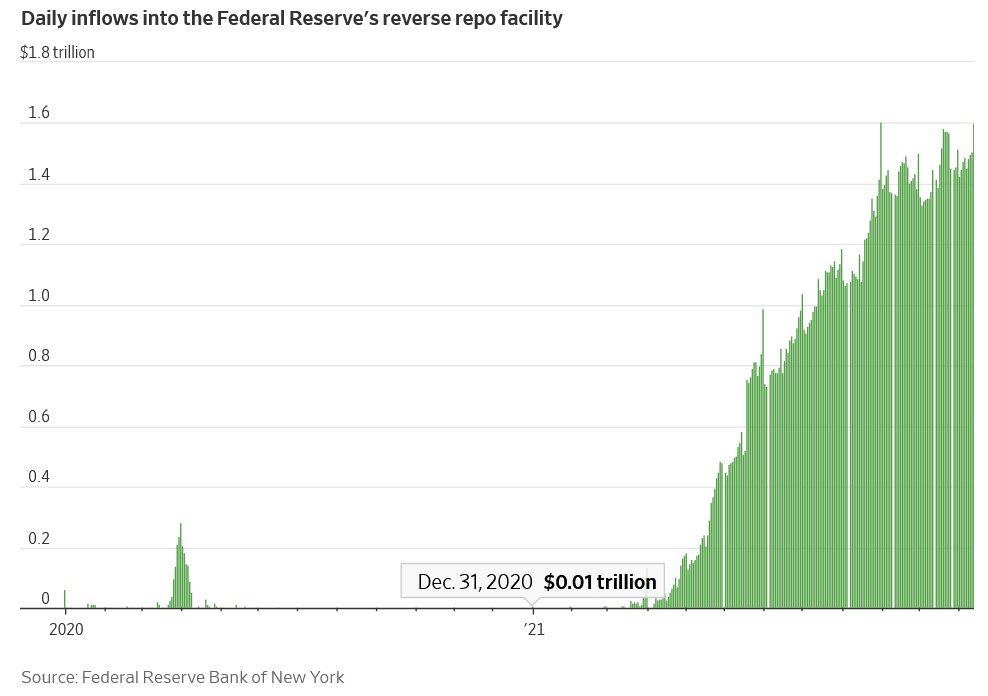 In addition, â€œThe increase in the cost of converting euros into dollars is also an annual trend. It increases at the end of each year because the Basel Committee on Banking Supervision, a group of central bankers and global regulators, judges the systemic importance of a bank through its year-end balance sheet, which pushes some banks to try to reduce their holdings to avoid higher capital charges, said JÃ©rÃ´me Legras, head of research at Axiom Alternative Investments.

Does this flow to the dollar have a lasting effect on the exchange rate? The analysts quoted in the WSJ article say yes, but in practice it is not so clear, since the swap market by definition does not create new positions. And it’s positioning that determines spot prices. It’s a little interesting that European banks are avoiding markets closer to home, like the Hungarian 1 week at 2.90%.

This is an excerpt from “The Rockefeller Morning Briefing”, which is much larger (about 10 pages). The Briefing has been published daily for over 25 years and represents experienced analysis and insight. The report offers in-depth information and is not intended to guide FX trading. Rockefeller produces other reports (spot and forward) for trading purposes.

Get a two week trial of full reports and tips from traders for just $ 3.95. Click here!

Previous Ready for tax season? Here’s what you need to know
Next Six winter horse care tips to keep them happy and healthy this season