By Max Kendix for the Sunday Mail

Soaring prices and panic buying have become part of the new reality for ordinary Russians.

Harsh Western sanctions are expected to plunge the country into its deepest recession since the collapse of the Soviet Union three decades ago. 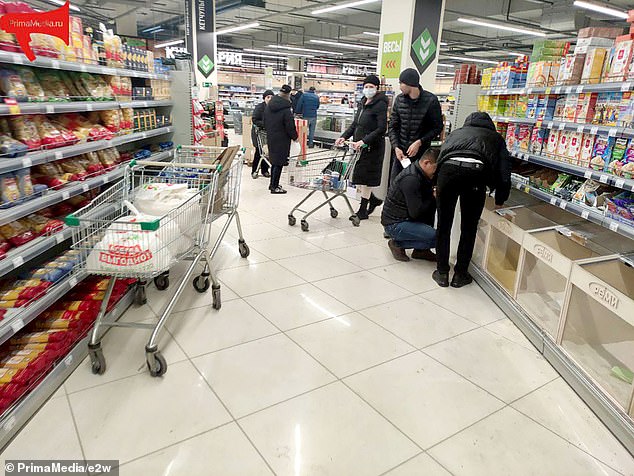 Instant coffee has increased by almost 70% and sugar by 30%.

Feminine hygiene products have been hit by supply shortages and the cost of a pregnancy test has soared by more than 80%.

There are also shortages of around 80 types of drugs, including insulin and painkillers.

Experts estimate that inflation will reach 24% this year.

The Mail on Sunday spoke to a cross-section of Russians to find out how their lives have changed since the measures were introduced.

Oleg, a 33-year-old photographer, said: “The black markets opened up. I used an alley to change rubles into dollars and hid them under my bed.

“I don’t know if the notes are real.”

He added: “I think that’s what the Germans felt with Hitler.”

Ivan, a 26-year-old programmer, wants to go abroad, but “can’t save enough money to emigrate”.

Student Liza, 20, said: ‘There is no sugar in the shops and as soon as it arrives all the grannies argue.

“People are buying sanitary napkins and selling them for exorbitant prices online.”

More than 500 companies have withdrawn from Russia, according to Yale University.

Daria, a 32-year-old business owner, said the situation looked like ‘betrayal’, adding: ‘Imagine everything is closed except Tesco and Primark, and half the shelves are just toilet paper.